On the one-year anniversary of the discovery of PFOA contamination in private drinking water supplies in Bennington, lawmakers are working to improve toxic pollution protections for Vermonters

One year ago this week, the toxic chemical PFOA was discovered in private wells in Bennington and North Bennington, Vermont. Since then, PFOA has been found at a number of other sites across Vermont. Testing of Bennington residents exposed to drinking water polluted with PFOA has revealed some people have high levels of the chemical in their blood.

The Bennington experience demonstrates that Vermonters are vulnerable to the dangers of toxic chemicals, and that there is more we can and must do to protect Vermont families and prevent another PFOA-like crisis from happening.

In response to the contamination in Bennington, last year the Vermont Legislature passed Act 154. This legislation created a working group of diverse stakeholders – made up of industry groups, public health officials, academics, and environmental health advocates – tasked with identifying gaps in current laws that prevent exposure to toxic chemicals and recommending ways to fill those gaps and better protect Vermonters.

Proposed legislative recommendations from the working group include:

At a press conference at the State House today, a group of legislative leaders, Vermonters impacted by PFOA contamination, business leaders, and environmental advocates highlighted the need for legislative action to strengthen safeguards against toxic chemical exposure in Vermont communities. 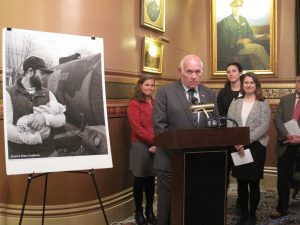 Bennington Senator Dick Sears added, “Too often we take for granted clean water. Clearly, we can’t do that anymore…Those who pollute our water should be held accountable…” 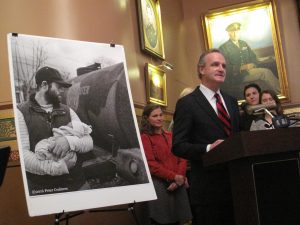 Senator Christopher Bray, Chair of the Senate Committee on Natural Resources and Energy

Senator Christopher Bray, Chair of the Senate Committee on Natural Resources and Energy added, “A year ago, we learned that hundreds of Vermonters in Bennington had their wells poisoned by the release of PFOA. The state and Senate have responded well to that event, but we also want to do more to protect Vermonters from all toxic chemicals. This week the Senate Natural Resources and Energy Committee began work on a bill to proactively address this ongoing risk on a statewide level.” 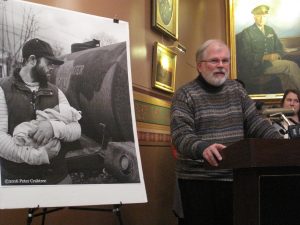 Reg Jones, Bennington resident, said “The worst part of this whole situation is the uncertainty of what the PFOA contamination has done to our health, our homes and gardens, and our lives in general. The PFOA level in our blood, as shown by blood tests, is well above the national levels. With a half-life of approximately four years it will take quite a while before the PFOA in our bodies is gradually is reduced.” 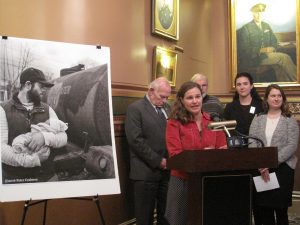 “The system regulating toxic chemicals is broken. Sadly, the citizens affected by contamination in the Bennington area have had to suffer the injustice of being the wake up call for the rest of the state. As Vermonters who have been affected by PFOA contamination will tell you, we are all vulnerable to the threats of toxic chemical pollution. Vermont needs to better protect its citizens from exposure to toxic chemicals and we’re encouraged to see our lawmakers working hard this session to do just that,” said Lauren Hierl, Political Director of Vermont Conservation Voters. 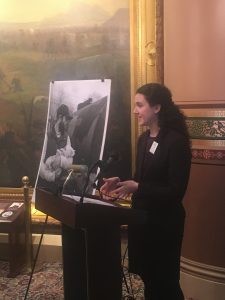 “Decades of research have linked PFOA and related chemicals to an array of health hazards including cancer, developmental toxicity and reduced effectiveness of vaccines. And releases of PFOA from manufacturing, waste disposal, firefighting foam, and other sources over multiple decades has contaminated the drinking water of at least 7 million Americans – now including hundreds of affected Vermonters. While we can’t fix the growing national crisis of chemical contamination today, we can start by fixing the gaps in our laws here at home right now,” added Shaina Kasper, Vermont State Director at Toxics Action Center. 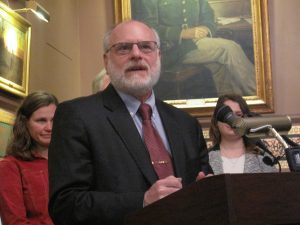 “Chemicals are part of life. Some are known to present hazards to human health. Others have impacts on our health about which we are still learning. Companies, large and small, track their use of chemicals for many reasons, including cost, liability, and regulation.  The recommendations of this committee were built on the current practices many businesses already use to reduce cost, minimize liability, and assure compliance with regulations. Most importantly, by implementing these recommendations, Vermont is lowering the risk of harm to its citizens and our environment, while providing incentive to companies to reduce their dependence on these chemicals,” said Martin Wolf, Director of Product Sustainability & Authenticity at Seventh Generation.