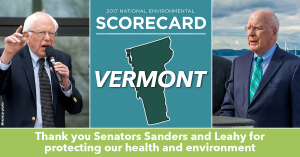 Montpelier, Vermont – Vermont Conservation Voters today released the Vermont delegation’s scores on the League of Conservation Voters’ (LCV) 2017 National Environmental Scorecard. The Scorecard is the primary yardstick for evaluating the environmental records of every member of Congress, and is available online at scorecard.lcv.org.

“As the Trump administration launched attack after attack on longstanding environmental protections, we thank Senator Patrick Leahy, Senator Bernie Sanders and Congressman Peter Welch for standing up for Vermont’s air, water, land and wildlife,” said Vermont Conservation Voters Executive Director Lauren Hierl. “It’s more crucial than ever that our representatives in Congress continue to fight for Vermont’s communities. But here’s the good news — despite the disastrous policy decisions coming out of Washington, we remain hopeful that Vermont will continue to build a clean, healthy future by advancing state legislation that aims to combat climate change, clean up our waters, reduce Vermonters’ exposure to toxic chemicals, and maintain healthy forests. And we’re more determined than ever to build on this progress in the months and years to come.”

The 2017 Scorecard measures votes cast during the first session of the 115th Congress. In Vermont, the state’s sole congressman, Peter Welch, earned a score of 97 percent, with Senator Sanders and Leahy both posting a 100% score.

“This Republican-led Congress repeatedly refused to stand up to President Trump’s extreme anti-environmental agenda and his attacks on our air, water, land and wildlife,” said LCV Senior Vice President for Government Affairs Tiernan Sittenfeld. “In a year where devastating hurricanes and wildfires showed why the need to fight climate change is so urgent, Congress instead inflicted lasting damage on our communities by reversing clean water protections, confirming industry favorites to key environmental posts and opening up the pristine Arctic National Wildlife Refuge to drilling. Our environmental champions are more important than ever as the administration’s hostility toward our communities continues to grow.”

LCV has published a National Environmental Scorecard for every Congress since 1970. The Scorecard represents the consensus of experts from about 20 respected environmental and conservation organizations who selected the key votes on which members of Congress should be scored. LCV scores votes on the most important issues of the year, including energy, climate change, public health, public lands and wildlife conservation, and spending for environmental programs. The votes included in the Scorecard presented members of Congress with a real choice and help distinguish which legislators are working for environmental protection. More information on individual votes and the Scorecard archive can be found at scorecard.lcv.org.