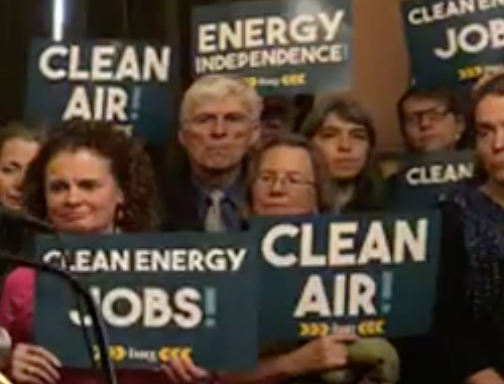 Focus on growing jobs, helping all participate in the clean energy transformation

“Nationwide – and here in Vermont – there is growing support for putting a price on carbon pollution,” said Rep. Sarah Copeland Hanzas. “By joining together, we are sharing best practices and creating a national state-based movement that helps us achieve not only our state goals for greenhouse gas reduction, but national benchmarks as well.”

Coalition members include lawmakers from Connecticut, Maryland, Massachusetts, New Hampshire, New York, Oregon, Rhode Island, Vermont, and Washington. Lawmakers in all nine states will be pushing bills this year to put a price on carbon pollution in their states. Rep. Copeland Hanzas today announced a House bill modeled after the ESSEX (Economy Strengthening Strategic Energy Exchange) Plan to price carbon pollution and use the revenues to reduce every Vermonters’ electric bills, with the additional financial benefit going to low income and rural Vermonters. The legislation is a companion bill to Senate S.284, which was previously introduced this year by Sen. Pearson.

“Putting a price on carbon pollution is an investment in the future of Vermont and the wellbeing of all Vermonters,” said Sen. Chris Pearson. “Vermont is well poised to be a leader in delivering the cleanest electricity in the region at the lowest rates, while ensuring that low- and middle-income Vermonters are prioritized.”

The National Caucus of Environmental Legislators (NCEL), a nationwide network of lawmakers focused on environmental protection, and the Meridian Institute have facilitated the convening of these leaders for two years. Formalizing this group strengthens regional momentum and progress at the state level. Coalition members recognize that each state proposal must be tailored to local needs. As a result, the group is connected by shared principles rather than legislative detail beyond putting a price on carbon.

“State legislators across the country know that they can’t wait for Washington to act on climate change,” said Jeff Mauk, Executive Director of NCEL. “Carbon pricing is a market-based strategy to reduce greenhouse gas emissions that is being praised by economists and leaders from across the political spectrum.”

“Together, these states are stepping up to let the nation know we’re ready for a clean energy future; we’re ready to help our residents make the transition to clean energy, and we’re not going to let the inaction at the federal level prevent good policy solutions from being implemented,” said Rep. David Deen.